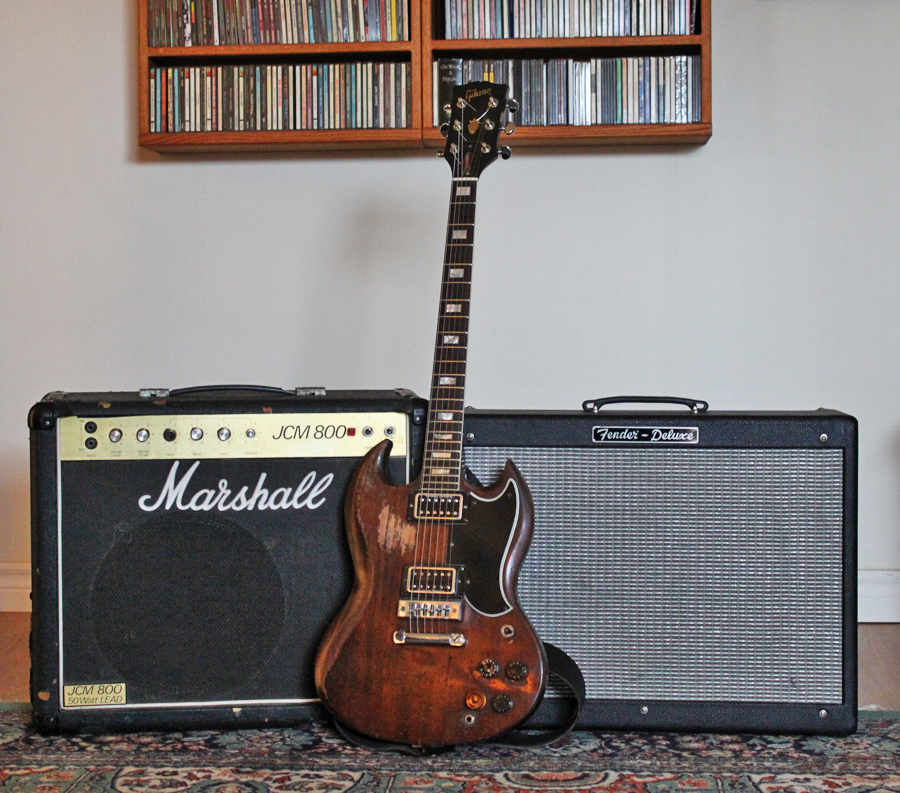 In 1978 I was being harrassed by my bandmates in Thundermug for tuning my guitar too much during live shows.  It was true.  So the cry became 'Bill needs a new guitar'.  Finally I agreed to get a new SG. The road crew arrived at Long and McQuade's (the original store on Bloor St in Toronto) before I did.  When I walked in the door the crew informed me that they had already picked out my guitar.  You can imagine my reply as I informed them only I could choose my own guitar.  Then they handed me "My Baby" for the first time and it was love at first lic.  In 2018 I will have played her for 40 years! "My Baby" is the guitar for me because I don't have to think when I play her.  She is never 'in the way' between me and the music.  An invisible translator.....now that's worth more than any amount of money!  And yes, amazingly, the road crew did pick her out!
(More "My Baby" stories to follow). B.D..

The Story of "My Baby" Gibson SG Guitar

I was playing in a bar in the 1990’s when a good looking, blond gentleman obviously well dressed approached me after the first set and asked me, “Is that your guitar?”. Yes I replied. “Have you had it since it was new?” Again I answered yes. “I want to buy it from you right now”. Well I knew the guitar had developed quite a patina or rough looking ‘aged’ surface since I had been playing it for 20 years at the time so I assumed the patina was what interested him.

“It is absolutely not for sale” I told him.

Well I was feeling pretty cocky because I happened to have a couple of thousand in my own wallet. I had already told him no way I going to sell my guitar which is like an extension of my heart and my hands so his offer did not impress me much.

After the second set he approached me again, “Look I have twenty thousand dollars in my pocket”, he showed me an enormous roll of money, “I will give you $13,000 for the guitar”. No man I replied. I can’t sell it to you. Now my lack of cooperation in the light of his massive money offer became a little frustrating to the gentleman. I am sure he was showing off to his friends and had told them ..watch I’m going home with that guy’s guitar tonight.

Before the last set he came to me again with one final offer and said “I’ll give you $13,000 American for the guitar”. The Canadian dollar usually is worth less than the American dollar so his offer according to the exchange rates of the time amounted to $18,000 Canadian!

I told him no. I will never part with "My Baby".

As it turned out the gentleman owned a company in Hollywood and Vancouver which obtained unique items for movie props. He offered to fly me down to California any time I wanted to sell the guitar. Not Yet. Not Yet. B.D.